Cracking the myth behind cooking with Extra Virgin Olive Oil A 2018 Australian study conducted in an Australian oil specialist laboratory, Modern Olives Laboratory, has shown that Australian Extra Virgin Olive Oil is the safest and most stable oil to cook with (including high temperatures such as deep frying1).

This article summarises the key outcomes of the paper to provide relevant implications for practice.

There is a common myth that Extra Virgin Olive Oil cannot be used for high temperature cooking due to its smoke point. This myth is not supported by any published evidence around common cooking oil smoke points and the correlation with stability and suitability for cooking.

To test ten of the most common cooking oils in Australian supermarkets for their safety and stability when heated.

Authors specifically assessed the correlation between smoke point and other key chemical parameters related to an oils stability and likelihood to break down and form harmful “polar compounds”.

FACT: Polar Compounds – a major breakdown byproduct of an oil when heated. Polar compounds have been consistently linked to negative health outcomes such as the development of Alzheimer’s and Parkinson’s Disease.

The most common cooking oils available in Australian supermarkets were tested:

Each oil was subjected to two different heating trials:

All oils were tested before, during and at the end of each trial for common quality  parameters related to an oils stability and breakdown.

FACT: These heating conditions were well above regular cooking conditions at home. 1800C is the standard deep-frying temperature. 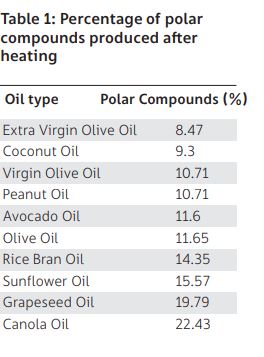 • Extra Virgin Olive Oil was found to be the safest and most stable oil to cook with, followed by Coconut Oil.

• The top performing oils produced the least number of polar compounds after heating.

• Production of polar compounds was more pronounced for refined oils which are higher in polyunsaturated fat such as Canola oil, Grapeseed oil and Rice Bran Oil.

• An oil’s smoke point correlated poorly with the likelihood of the oil to break down and form harmful compounds when heated.

Key factors that correlated strongly with how likely an oil was to break down and form harmful compounds when heated were:

The more refined an oil was, the more likely it was to break down. (Due to the refining process, refined oils already contain secondary products of oxidation prior to cooking.)

2. Level of natural antioxidants in the oil.

The less antioxidants an oil contained, the more likely it was to break down and form harmful compounds.

Practice implication: Recommend cooking oils that have high levels of antioxidants, as this increases the oils resistance to  break down.

3. Level of polyunsaturated fat in the oil.

The more polyunsaturated fat in the oil, the more likely it was to break down and form harmful compounds (oxidation occurs more readily with multiple double bonds present in the fatty acids).

Practice implication: Recommend  cooking oils that have lower levels of polyunsaturated fat, to reduce the level of oil breakdown when heated.

This study reaffirmed the lack of published technical evidence to support smoke point as a good indicator of how stable an oil is when heated. It also builds on the results of many studies that support the heat stability and health benefits of cooking with Extra Virgin Olive Oil.2-10

• Smoke point is not a relevant factor in determining how suitable an oil is to cook with.

This research was conducted and funded by Modern Olives Laboratory Services. Modern Olives Laboratory Services was established in 2006 and is a fully accredited olive oil laboratory in Victoria, and the only oil specialist laboratory in Australia. It holds accreditation with national and international authorities including NATA (ISO 17025), the American Oil Chemists Society (AOCS), International Olive Council (IOC) and TGA license. The laboratory is a subsidiary of Boundary Bend Limited, a leading producer of Extra Virgin Olive Oil in Australia,  including the Cobram Estate brand. It is independently operated and completes work for Boundary Bend Limited and other retail brands,  and organisations in Australia and around the world.  Its team of oil specialists and researchers have published nearly 20 peer reviewed  research papers. Published research conducted by Modern Olives undergoes full peer-reviewed processes (as any other research institution/organisation), to validate their finding, data and conclusions.  For questions regarding Modern Olives Laboratory, research outcomes or future research collaborations, please email: Claudia Guillaume at [email protected]