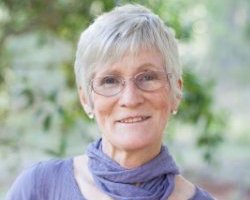 “5 Questions with…” Joan Breakey, APD, groundbreaking food intolerance dietitian. Joan has had a fascinating and challenging career as one of the few dietitians in the world who has a lifetime of specialisation in the area of food sensitivity.

Food-sensitive people are often those who are very sensitive to food additives, natural food chemicals as well as smells, strong tastes, bright lights, particular noises, and textured clothes. Through her work with hundreds of food-sensitive people, Joan can present an expert and informed picture of what happens in food sensitivity, from clinical findings using her “Diet Detective Investigation” method.

Given her incredible background [jump below in this article to read more about Joan’s career, and find links to her online resources], we were especially grateful for the chance recently to talk to this nutrition leader and pioneering researcher. Have a read in and learn more about Joan through these five questions we posed to her:

#1 DC: You are celebrating 50 years in dietetics! What advice would you give to a newly graduated dietetics professional?

JB: Enjoy your interesting profession! Being a dietitian and a scientist is part of who I am. Keep following your passion and be open to new directions. You may end up in a completely unexpected area, as I did. When I began dietetics, nobody had any idea that additive colour and flavour were anything other than innocuous substances in food.

What kept me in the profession for as long as I have been? Simple: I always saw myself as a dietitian and a scientist. It was part of me. It became part of my personality, and I never really thought I’d be anything but a dietitian.

Any article or book on science interests me. It’s another part of what keeps me excited about dietetics.

#2 DC: What sources do you rely on the most, to stay up to date with the latest evidence-based nutrition news?

JB: If you work in a new area, you gain much from knowing a variety of people who are connected to your area in some way. It can be surprising who sends something that turns out to be really relevant. Let others know what you’re interested in! Quite often they will give you information and think of you.

Thirty to forty years ago [when there were no computers], You had to keep up by reading articles, noting references, and then spending hours in libraries finding the journal you wanted, and then lining up at the photocopy for your copy. Hard copies of key references were very precious! I still have many that are not available on line as they are old — but important.

#3 DC: Who do you consider as a role model in your career, and why?

JB: Over 50 years, there were many! For four years around 1980, I was the Adviser in Nutrition and Dietetics to the Director General of Qld Health Dr Peter Livingstone. His confidence in me as a senior public health dietitian boosted me in all aspects of my career.

An important role model was Professor Conor Reilly a very early professor of nutrition in Queensland. He was prepared to push for me to conduct research for a Masters Degree in an area that was so controversial that academics were not prepared to allow such research. My husband Cary, a child psychiatrist, supported being an independent thinker, and acted as Devil’s advocate with regard to all other factors that could affect child behaviour.

My daughter, Noreen, a lecturer in Tourism, is an expert in marketing and in understanding how best to reach the general public when I was writing books and producing a website. She was always there to boost my confidence when it was lagging. My son, Hugh, is a philosopher. He edited my books and ensured that my articles and presentations were logical.

We make a great team!

Another important source of role modelling were the many dietitians who I crossed paths with, who, in many different ways, supported or challenged wherever I was in my career. They act as role models. Examples for me include Trudy Williams, who mentors me on writing and publishing books, and others who say supportive things to me, such as Zoe Nicholson, who also is very interested in food sensitivity.

I’ve learned that we can have friends who are dietitians — and friends because they are dietitians. There’s an interesting distinction.

#4 DC: Can you recommend a book you’ve read that has impacted your career in a significant way?

Mackarness, an English psychiatrist, wrote Not all in the mind in 1976 with his suggestion of a Cave Man’s diet with no added sugar or grains.

Both were very controversial works.

I used to have the letters from each of them, in response to my questioning about the other, that the other was not correct and they were, about diet and behaviour and mood! Both proved to contribute aspects to what I now call food sensitivity.

#5 DC: What motivates you to get up in the morning?

JB: My curiosity about science. I am always interested in hearing about what has been found in science that we did not know 10 years ago, and how my patients are going.

We underestimate curiosity. I remember a lecturer telling me, if you’re curious, you’re always wanting to go further.

I feel strongly about the value of clinical discovery and its role in progressing what we know in our particular area. I keep collecting information on new directions my patients take me. Listening to the words patients use to describe their world means I am always conducting clinical research. I like how thinking in science develops.

I’ve had a very controversial area, and have had to work independently. It has taken time to collect information on specific topics as there is much that is still unknown or there’s only a small amount of data on the many parts to this topic.

The concept of, the lived experience of some group is becoming accepted as something people say is worth talking about – whereas, I worked at a time when, if you had an extraordinary change in your clinical study, it would be considered anecdotal and dismissed!

At present I am reading about the development of thinking about genetics and Darwin’s ideas and how they have moved over more than 100 years. We live in a fascinating world!

To learn more about Joan and her work:

• Articles on food intolerance symptoms and free downloads of the first chapters of Joan’s books are available on her website, www.FoodIntolerancePro.com.

• In 2015, we were thrilled to have Joan as a guest for an exclusive DC webinar: “Working on our own, and don’t we all? Using food sensitivity investigation as an example.” Noted Joan in the webinar’s description, “The dietitians we become develop from how we practice which is shaped by who we are and also by what we do, and how others react to both of these. Working with diet investigation has provided many examples of challenges dietitians face in our fascinating career choice.”

A dietitian, home economist and teacher, as well as a clinical researcher specialising in food chemical intolerance, Joan began her first work on diet and hyperactivity in 1975. Ever since, she has written, published and presented the results of her ongoing research in this specialty.

Joan served as the Adviser in Nutrition and Dietetics to the Department of Health in Queensland (Australia) for four years and part-time as a Dietitian in Community Child Mental Health for 10 years. She continued conducting clinical research with families using dietary treatment for behaviour, learning and activity problems, and in 1991 published the results of a study of over 500 families; over 100 in detail for her Master’s degree; and another 500, before writing Are You Food Sensitive? In addition to that book, Joan is also the author of the companion Dietitians Manual, using the Diet Detective Method, as well as Fussy Baby and Tolerating Troublesome Foods. She had an invited chapter published in the international book Food Additives in 2000.

She has worked with hundreds of families in private practice investigating the role of diet – not just in behaviour, ADHD, and ASD, but also in treatment of physical, allergic and food intolerance symptoms, such as eczema, asthma, hay fever, migraine and IBS.

In 1995, Joan received a Master of Applied Science degree for her research in food sensitivity. The Thesis showing the evidence base is available in eBook format.