Leave Your Comfort Zone Behind: How Rachael Bermingham Managed Changes in Her Career, and Came Out on Top 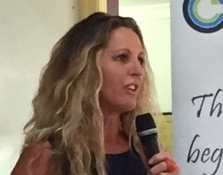 Our theme of “managing change” this newsletter coincides nicely with an inspirational speaker I was lucky enough to hear recently: Rachael Bermingham.

Rachael is the co-author of the “4 Ingredients” cookbooks – the original of which was the highest selling self-published book in Australia in the past decade. She has since managed to write a new book every year for the last ten years, and has sold more than 7 million books. Staggering!

One of the key reasons why Rachael achieved success on such a grand scale is because she’s spent a lifetime managing the changes that life brought her way, and taking advantage of the new opportunities subsequently presented.

Rachael started her own business as a hairdresser at age 19. She learned critical skills in this first career: to really listen to, engage with and build relationships with her clients.

She left hairdressing behind to move into work with Movie World, then took a job feeding the sharks at Underwater World. With these skills under her belt [and let’s be honest, feeding sharks is a skill worth learning – better to feed than become shark food!], Rachael transitioned into the business of travel, and built up her own travel agency.

It became clear to Rachael that she was driven by building something from nothing. Her modus operandi was to believe in herself, have intention to achieve — and then take action.

So she ventured into the world of publishing, leaving the travel business behind. The first “4 Ingredients” cookbook turned her and he co-author into household names. Today, she’s moved beyond “4 Ingredients” and now consults as an expert on publishing books. She also continues to write books, owns a book-publishing company, and accepts speaking and mentoring opportunities.

With such diverse career experiences, one would think it would be difficult to start again each time she entered a new field. But Rachael learned a valuable lesson along the way that helped her manage through change.

She became adept at understanding how to market to her target audience – no matter WHAT industry she found herself in. She quotes Gerry Harvey in saying that 80% of business is marketing — so she taught herself everything she could on the topic.

Now a pro at marketing, she highlights the importance of 1) knowing who your target market is, 2) understanding the problems they face, and 3) being aware of their aspirations. She also cites having a marketing plan as key to a business’s growth.

All of the change in Rachael’s life took a financial toll: she made and lost millions of dollars – multiple times. The lesson this taught her was to “keep things real”.

She also learned tenacity. Rachael recalled a time where she was trying to get on the number one TV show in Australia to talk about one of her books, as she knew this was the best free marketing strategy she could implement. She called each week, and they were not interested. So she just kept calling the producers weekly, even though she felt sick and was shaking making the calls. One week, a different person answered the phone, and they loved her story — and the next day she was on the TV show, and her book went on to be a bestseller.

The ability to embrace change and make the most of it has made Rachael the successful businesswoman she is today. She says you have to get outside of your comfort zone to do things you don’t want to do; you need to push yourself beyond your limits, and that is where the gold is at the end of the rainbow, each and every time. I loved her final quote: “Life is not about finding yourself, but creating yourself”.